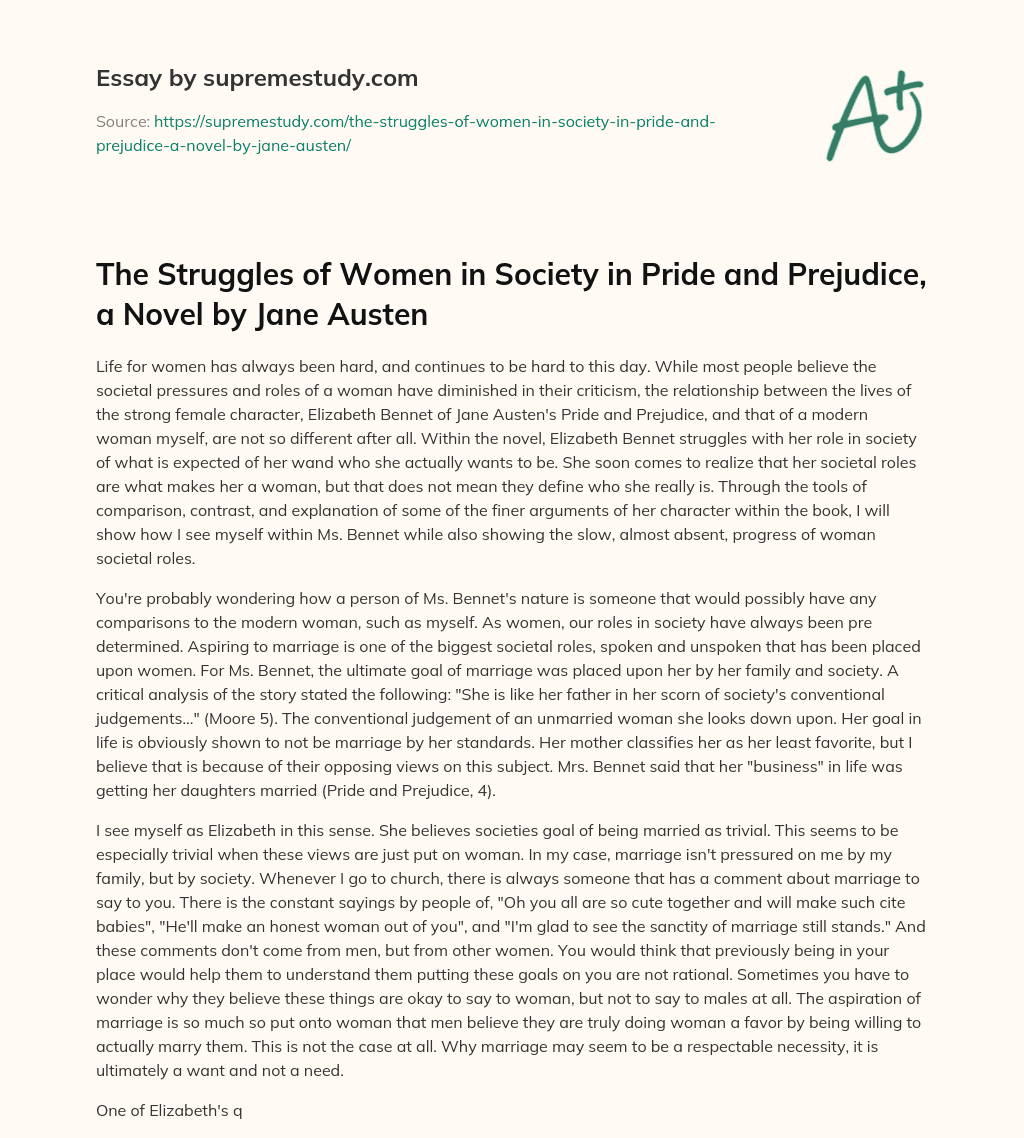 The Struggles of Women in Society in Pride and Prejudice, a Novel by Jane Austen

Life for women has always been hard, and continues to be hard to this day. While most people believe the societal pressures and roles of a woman have diminished in their criticism, the relationship between the lives of the strong female character, Elizabeth Bennet of Jane Austen’s Pride and Prejudice, and that of a modern woman myself, are not so different after all. Within the novel, Elizabeth Bennet struggles with her role in society of what is expected of her wand who she actually wants to be. She soon comes to realize that her societal roles are what makes her a woman, but that does not mean they define who she really is. Through the tools of comparison, contrast, and explanation of some of the finer arguments of her character within the book, I will show how I see myself within Ms. Bennet while also showing the slow, almost absent, progress of woman societal roles.

You’re probably wondering how a person of Ms. Bennet’s nature is someone that would possibly have any comparisons to the modern woman, such as myself. As women, our roles in society have always been pre determined. Aspiring to marriage is one of the biggest societal roles, spoken and unspoken that has been placed upon women. For Ms. Bennet, the ultimate goal of marriage was placed upon her by her family and society. A critical analysis of the story stated the following: “She is like her father in her scorn of society’s conventional judgements…” (Moore 5). The conventional judgement of an unmarried woman she looks down upon. Her goal in life is obviously shown to not be marriage by her standards. Her mother classifies her as her least favorite, but I believe that is because of their opposing views on this subject. Mrs. Bennet said that her “business” in life was getting her daughters married (Pride and Prejudice, 4).

I see myself as Elizabeth in this sense. She believes societies goal of being married as trivial. This seems to be especially trivial when these views are just put on woman. In my case, marriage isn’t pressured on me by my family, but by society. Whenever I go to church, there is always someone that has a comment about marriage to say to you. There is the constant sayings by people of, “Oh you all are so cute together and will make such cite babies”, “He’ll make an honest woman out of you”, and “I’m glad to see the sanctity of marriage still stands.” And these comments don’t come from men, but from other women. You would think that previously being in your place would help them to understand them putting these goals on you are not rational. Sometimes you have to wonder why they believe these things are okay to say to woman, but not to say to males at all. The aspiration of marriage is so much so put onto woman that men believe they are truly doing woman a favor by being willing to actually marry them. This is not the case at all. Why marriage may seem to be a respectable necessity, it is ultimately a want and not a need.

One of Elizabeth’s quote’s from Pride and Prejudice is as follows:

“You are mistaken Mr. Darcy, if you suppose that the mode of your declaration affected me in any other way, than as it spared me the concern which I might have felt in refusing you, had you behaved in a more gentlemanlike manner (Austen 250).”

In this quote, Ms. Bennet is denying Mr. Darcy’s proposal for marriage in a rude way, because by her reasoning he deserved it. He believed himself entitled to her hand by just asking because society has implicated the need for a woman to be married and he is the best she could possibly got. I agree with her way of doing this because he obviously needs to be brought down. He needed to realize that just because that is what society has said, does not mean that it is what every woman believes.

Within Pride and Prejudice, Elizabeth makes a point of which I do not quite agree.

“To yield readily – easily – to the persuasion of a friend is no merit with you (Austen 67).”

I believe this statement carries little truth overall. To readily yield to the persuasion of your friends does not always mean that you contain no merit. Sometimes it just means that you understand that your friends may have already been in that situation and only wish to help you out of it. For myself, my friends gave me advice on my love life. I asked them about how to approach my feelings for someone while not scaring that person away. They then explained to me that if I could scare that person away was only by confessing my feelings, then they weren’t worth it to begin with. By taking this advice without questioning it, I made one of the best decisions in my life. I finally made a decision that truly benefitted me and helped me in the long run. I also got valuable life lessons out of it that I could pass on later in life.

Some people may truly wonder why Elizabeth was even a viable character for me to pick from Ms. Austen’s work. I could give the basic answer of that the whole book is written from her point of view, but it goes much deeper than that. Elizabeth is a main character based on her dynamic views in contrast to the static views of all of the other characters. She truly sets out on a personal adventure in which she discovers more about herself and the world around her that she thought she knew. Elizabeth stated the following about her personal revelation:

“Had I been in love, I could not have been more wretchedly blind! But vanity, not love, has been my folly. Pleased with the preference of one, and offended by the neglect of the other, on the very beginning of our acquaintance, I have courted prepossession and ignorance, and driven reason away where either were concerned. Till this moment I never knew myself. (Austen 297).”

She shows in this the true self-revelation of which the story was climaxing to reach. She was essentially acting as a hypocrite the whole time throughout the story up until this moment. She finally understands how the world may operate, but that even within this world she plays a bigger role than she truly realized. By going against the gradient, she essentially paved the way for other woman that may choose to share her same path one day.

Ultimately, you recognize the voice of the character for most women. Elizabeth relates to the women of today’s culture that question their role, but still don’t understand themselves. She shows once you learn yourself and understand the true dynamic of society, then you can understand Elizabeth as a whole. Only then can understanding for all be achieved.

The Struggles of Women in Society in Pride and Prejudice, a Novel by Jane Austen. (2022, Dec 05). Retrieved February 2, 2023 , from
https://supremestudy.com/the-struggles-of-women-in-society-in-pride-and-prejudice-a-novel-by-jane-austen/

Essays Related To The Struggles of Women in Society in Pride and Prejudice, a Novel by Jane Austen

A Short Review of Pride and Prejudice, a Novel by Jane Austen