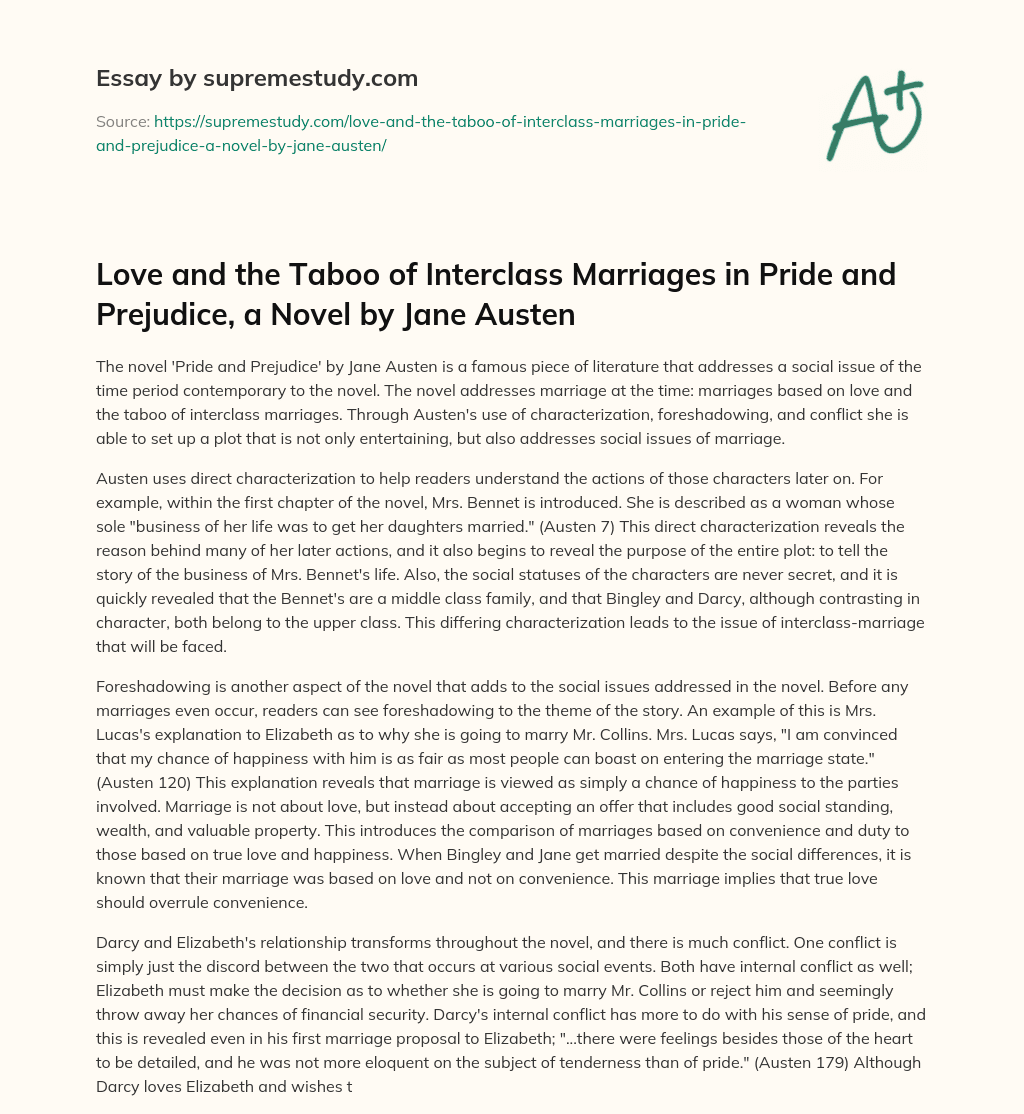 The novel ‘Pride and Prejudice’ by Jane Austen is a famous piece of literature that addresses a social issue of the time period contemporary to the novel. The novel addresses marriage at the time: marriages based on love and the taboo of interclass marriages. Through Austen’s use of characterization, foreshadowing, and conflict she is able to set up a plot that is not only entertaining, but also addresses social issues of marriage.

Austen uses direct characterization to help readers understand the actions of those characters later on. For example, within the first chapter of the novel, Mrs. Bennet is introduced. She is described as a woman whose sole “business of her life was to get her daughters married.” (Austen 7) This direct characterization reveals the reason behind many of her later actions, and it also begins to reveal the purpose of the entire plot: to tell the story of the business of Mrs. Bennet’s life. Also, the social statuses of the characters are never secret, and it is quickly revealed that the Bennet’s are a middle class family, and that Bingley and Darcy, although contrasting in character, both belong to the upper class. This differing characterization leads to the issue of interclass-marriage that will be faced.

Foreshadowing is another aspect of the novel that adds to the social issues addressed in the novel. Before any marriages even occur, readers can see foreshadowing to the theme of the story. An example of this is Mrs. Lucas’s explanation to Elizabeth as to why she is going to marry Mr. Collins. Mrs. Lucas says, “I am convinced that my chance of happiness with him is as fair as most people can boast on entering the marriage state.” (Austen 120) This explanation reveals that marriage is viewed as simply a chance of happiness to the parties involved. Marriage is not about love, but instead about accepting an offer that includes good social standing, wealth, and valuable property. This introduces the comparison of marriages based on convenience and duty to those based on true love and happiness. When Bingley and Jane get married despite the social differences, it is known that their marriage was based on love and not on convenience. This marriage implies that true love should overrule convenience.

Darcy and Elizabeth’s relationship transforms throughout the novel, and there is much conflict. One conflict is simply just the discord between the two that occurs at various social events. Both have internal conflict as well; Elizabeth must make the decision as to whether she is going to marry Mr. Collins or reject him and seemingly throw away her chances of financial security. Darcy’s internal conflict has more to do with his sense of pride, and this is revealed even in his first marriage proposal to Elizabeth; “…there were feelings besides those of the heart to be detailed, and he was not more eloquent on the subject of tenderness than of pride.” (Austen 179) Although Darcy loves Elizabeth and wishes to marry her, he is conflicted by his pride and her social inferiority. However, the two marry, and Austen implies another truth of marriage: love is more important than staying within your social class.

Pride and Prejudice is a novel that has had great influence on many works that have been written since its publication. Austen’s tale of the search for husbands for the Bennet girls addresses several social issues dealing with marriage. These issues include marrying out of convenience and interclass marriage, but the message is clear: true love trumps all.

Love and the Taboo of Interclass Marriages in Pride and Prejudice, a Novel by Jane Austen. (2022, Dec 05). Retrieved February 2, 2023 , from
https://supremestudy.com/love-and-the-taboo-of-interclass-marriages-in-pride-and-prejudice-a-novel-by-jane-austen/

Essays Related To Love and the Taboo of Interclass Marriages in Pride and Prejudice, a Novel by Jane Austen

Character Analysis of Lydia and Junior in Pride and Prejudice, a Novel by Jane Austen