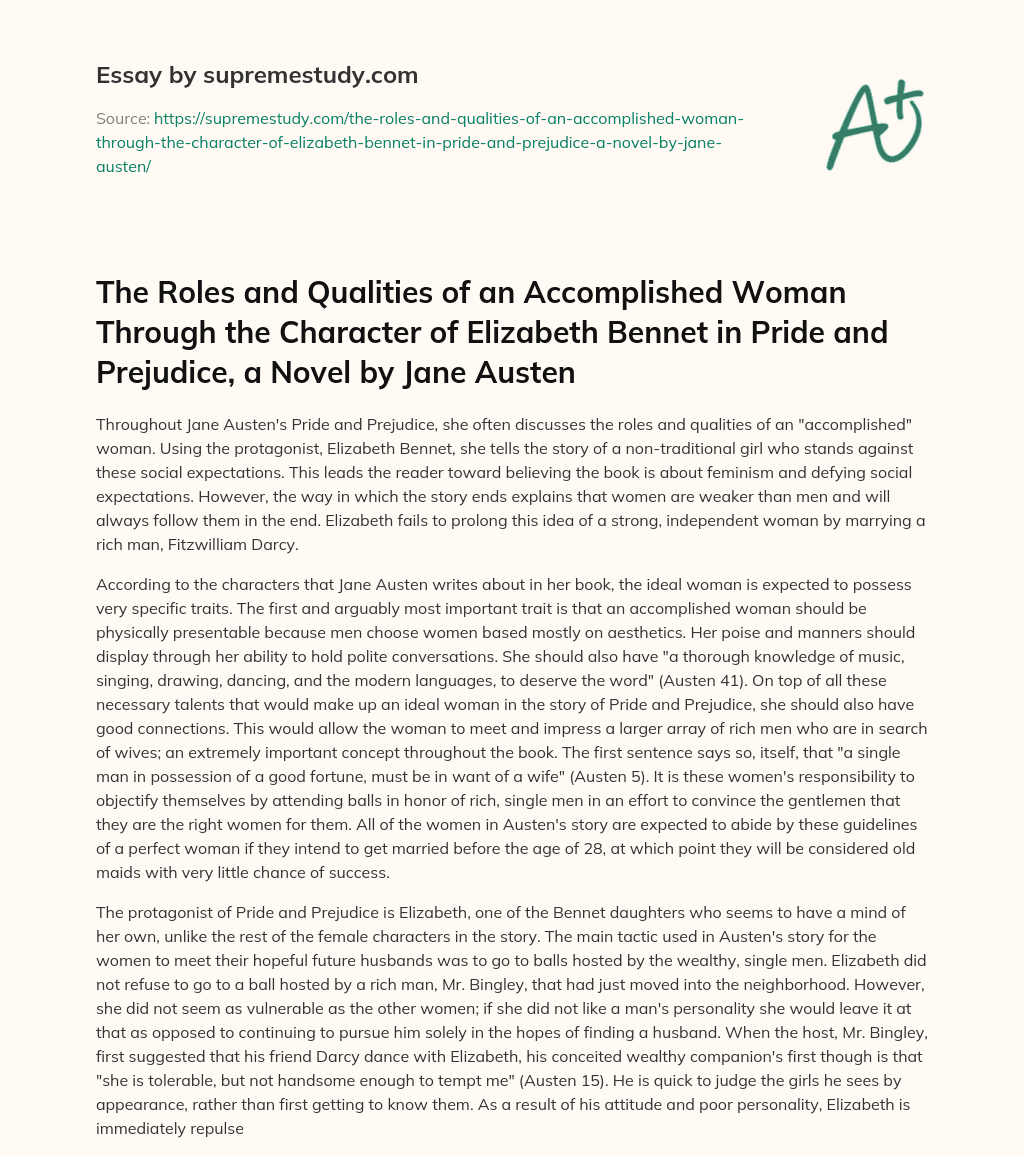 The Roles and Qualities of an Accomplished Woman Through the Character of Elizabeth Bennet in Pride and Prejudice, a Novel by Jane Austen

Throughout Jane Austen’s Pride and Prejudice, she often discusses the roles and qualities of an “accomplished” woman. Using the protagonist, Elizabeth Bennet, she tells the story of a non-traditional girl who stands against these social expectations. This leads the reader toward believing the book is about feminism and defying social expectations. However, the way in which the story ends explains that women are weaker than men and will always follow them in the end. Elizabeth fails to prolong this idea of a strong, independent woman by marrying a rich man, Fitzwilliam Darcy.

According to the characters that Jane Austen writes about in her book, the ideal woman is expected to possess very specific traits. The first and arguably most important trait is that an accomplished woman should be physically presentable because men choose women based mostly on aesthetics. Her poise and manners should display through her ability to hold polite conversations. She should also have “a thorough knowledge of music, singing, drawing, dancing, and the modern languages, to deserve the word” (Austen 41). On top of all these necessary talents that would make up an ideal woman in the story of Pride and Prejudice, she should also have good connections. This would allow the woman to meet and impress a larger array of rich men who are in search of wives; an extremely important concept throughout the book. The first sentence says so, itself, that “a single man in possession of a good fortune, must be in want of a wife” (Austen 5). It is these women’s responsibility to objectify themselves by attending balls in honor of rich, single men in an effort to convince the gentlemen that they are the right women for them. All of the women in Austen’s story are expected to abide by these guidelines of a perfect woman if they intend to get married before the age of 28, at which point they will be considered old maids with very little chance of success.

The protagonist of Pride and Prejudice is Elizabeth, one of the Bennet daughters who seems to have a mind of her own, unlike the rest of the female characters in the story. The main tactic used in Austen’s story for the women to meet their hopeful future husbands was to go to balls hosted by the wealthy, single men. Elizabeth did not refuse to go to a ball hosted by a rich man, Mr. Bingley, that had just moved into the neighborhood. However, she did not seem as vulnerable as the other women; if she did not like a man’s personality she would leave it at that as opposed to continuing to pursue him solely in the hopes of finding a husband. When the host, Mr. Bingley, first suggested that his friend Darcy dance with Elizabeth, his conceited wealthy companion’s first though is that “she is tolerable, but not handsome enough to tempt me” (Austen 15). He is quick to judge the girls he sees by appearance, rather than first getting to know them. As a result of his attitude and poor personality, Elizabeth is immediately repulsed and develops a strong dislike for Mr. Darcy.

We are led to believe, at first, that Elizabeth is going to be the woman who defies the social normalities of ladylike behavior. Jane Austen leads us to this quick conclusion because of how Elizabeth acts toward Darcy, Mr. Bingleys extremely rude and rich friend. Despite his conceited behavior, especially toward Elizabeth, Fitzwilliam Darcy decides to propose. He says “In vain have I struggled. It will not do. My feelings will not be repressed. You must allow me to tell you how ardently I admire and love you” (Austen 165). He goes on and Elizabeth “could easily see that he had no doubt of a favourable answer. He spoke of apprehension and anxiety, but his countenance expressed real security” (Austen 165). In his point of view she has no reason to not say yes; he is rich and offering her a husband which most every other girl in the story would think to be foolish to pass up. Her denial leaves her in shock; she was not expecting the proposal in the first place. It is clear to Elizabeth that “he was not more eloquent on the subject of tenderness than of pride” (Austen 165). This shows the reader that Austen has finally introduced us to a woman capable of denying a man, despite his materialistic advantages – like wealth and property. At this point in the book, the perspective in which the plot is being told has begun to sound like that of a feminist; someone to prove woman can be stronger than man.

Despite the sudden change in perspective in the story, Elizabeth soon proves that she is not that strong after all. After an unexpected encounter with Darcy on a visit to Pemberley, seeing his wonderful house, and realizing she was the one apparently at fault for judging him too quickly, the once seemingly independent Bennet daughter changes her mind about wanting to marry him. At this point in Pride and Prejudice, this protagonist takes a moment to dwell over her newly altered feelings for Mr. Fitzwilliam Darcy. “The proposal which she had proudly spurned only four months ago, would now have been gladly and gratefully received!” (Austen 264). Not surprisingly, Elizabeth is starting to ease her way back into the mold of what a proper woman should represent. At this point, when Elizabeth hears a rumor that Darcy is planning to propose again, she is ecstatic. She claims she is going to say yes solely to “act in that manner, which will, in [her] own opinion, constitute [her] happiness” (Austen 303) but Jane Austen has made it a very strong point that women can never truly do things for themselves and be unique from each other. They are a weak sex that will do anything to obtain a wealthy husband.

As things come to a close in Jane Austen’s Pride and Prejudice, the readers learn that although a female may seem strong at first, she is ultimately part of the weaker sex; it is, perhaps, a truth universally acknowledged. The women of this time were expected to abide by their proper roles and to have to the qualities that men expected when in search for a wife. Austen upholds this social expectation for women through the romance of Elizabeth Bennet and Fitzwilliam Darcy, proving that one should not be quick to label a female as a feminist because she will always fall vulnerable as the weaker sex, in the end.

The Roles and Qualities of an Accomplished Woman Through the Character of Elizabeth Bennet in Pride and Prejudice, a Novel by Jane Austen. (2022, Dec 05). Retrieved February 2, 2023 , from
https://supremestudy.com/the-roles-and-qualities-of-an-accomplished-woman-through-the-character-of-elizabeth-bennet-in-pride-and-prejudice-a-novel-by-jane-austen/

Essays Related To The Roles and Qualities of an Accomplished Woman Through the Character of Elizabeth Bennet in Pride and Prejudice, a Novel by Jane Austen

A Short Review of Pride and Prejudice, a Novel by Jane Austen

The Struggles of Women in Society in Pride and Prejudice, a Novel by Jane Austen