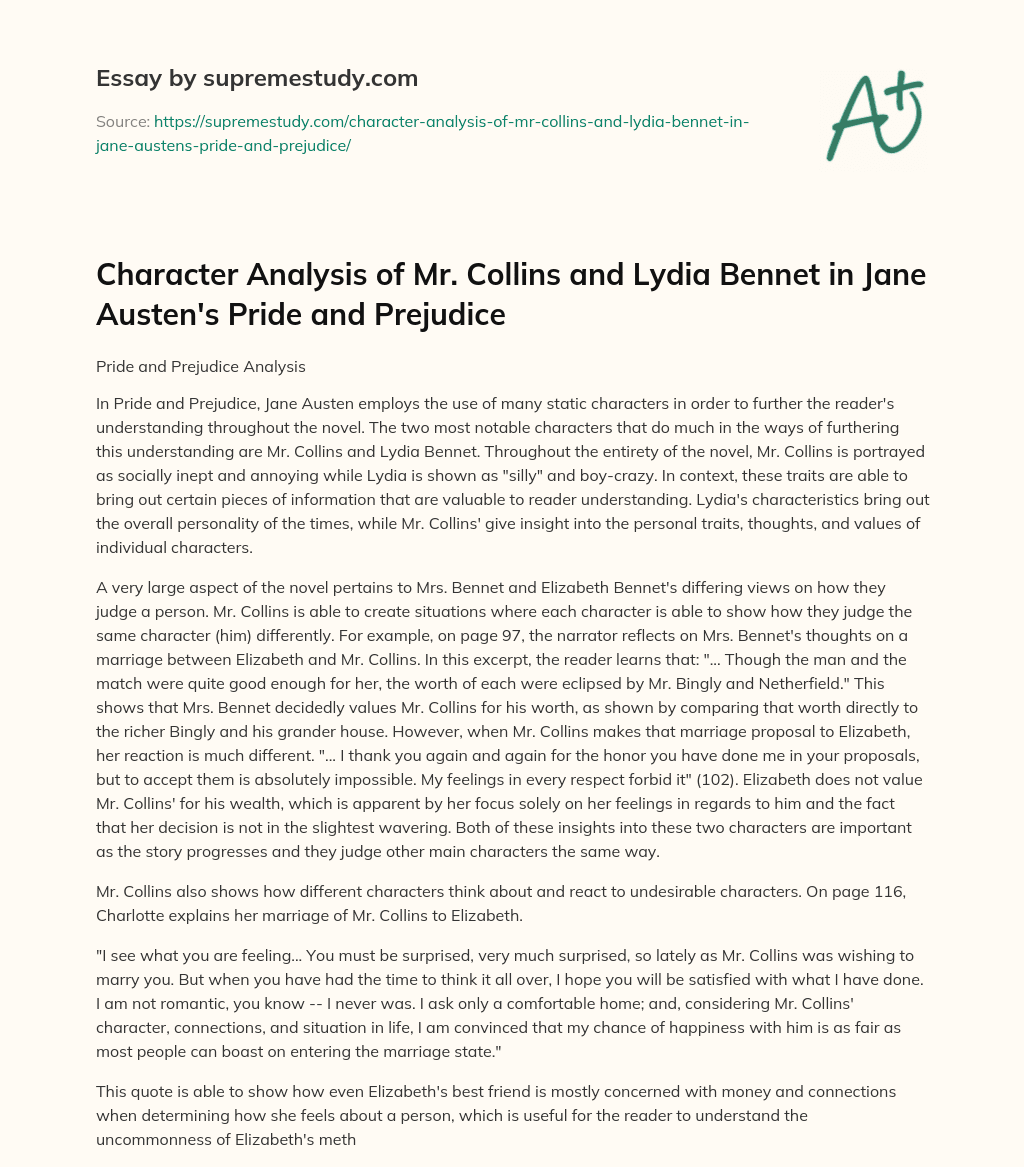 In Pride and Prejudice, Jane Austen employs the use of many static characters in order to further the reader’s understanding throughout the novel. The two most notable characters that do much in the ways of furthering this understanding are Mr. Collins and Lydia Bennet. Throughout the entirety of the novel, Mr. Collins is portrayed as socially inept and annoying while Lydia is shown as “silly” and boy-crazy. In context, these traits are able to bring out certain pieces of information that are valuable to reader understanding. Lydia’s characteristics bring out the overall personality of the times, while Mr. Collins’ give insight into the personal traits, thoughts, and values of individual characters.

A very large aspect of the novel pertains to Mrs. Bennet and Elizabeth Bennet’s differing views on how they judge a person. Mr. Collins is able to create situations where each character is able to show how they judge the same character (him) differently. For example, on page 97, the narrator reflects on Mrs. Bennet’s thoughts on a marriage between Elizabeth and Mr. Collins. In this excerpt, the reader learns that: “… Though the man and the match were quite good enough for her, the worth of each were eclipsed by Mr. Bingly and Netherfield.” This shows that Mrs. Bennet decidedly values Mr. Collins for his worth, as shown by comparing that worth directly to the richer Bingly and his grander house. However, when Mr. Collins makes that marriage proposal to Elizabeth, her reaction is much different. “… I thank you again and again for the honor you have done me in your proposals, but to accept them is absolutely impossible. My feelings in every respect forbid it” (102). Elizabeth does not value Mr. Collins’ for his wealth, which is apparent by her focus solely on her feelings in regards to him and the fact that her decision is not in the slightest wavering. Both of these insights into these two characters are important as the story progresses and they judge other main characters the same way.

Mr. Collins also shows how different characters think about and react to undesirable characters. On page 116, Charlotte explains her marriage of Mr. Collins to Elizabeth.

“I see what you are feeling… You must be surprised, very much surprised, so lately as Mr. Collins was wishing to marry you. But when you have had the time to think it all over, I hope you will be satisfied with what I have done. I am not romantic, you know — I never was. I ask only a comfortable home; and, considering Mr. Collins’ character, connections, and situation in life, I am convinced that my chance of happiness with him is as fair as most people can boast on entering the marriage state.”

This quote is able to show how even Elizabeth’s best friend is mostly concerned with money and connections when determining how she feels about a person, which is useful for the reader to understand the uncommonness of Elizabeth’s method of judgement. Austen also writes that Elizabeth “…Did not often speak unnecessarily to Mr. Collins…” (84). Which exemplifies that Elizabeth is only as polite as she needs to be when she finds a character’s personality annoying. She would rather have no conversation than any conversation that she may find unpleasant. This knowledge sets up future conversations between Elizabeth and other main characters.

Finally, the biggest thing that Lydia is able to do for the story is to show how important propriety is for family as a whole. Even Elizabeth, the character whom is least concerned with propriety, finds it important to be socially correct. This is exemplified when she is asking her father not to allow Lydia to travel to Brighton. “If you were aware… of the very great disadvantage to us all which must arise from the public notice of Lydia’s unguarded and imprudent manner, nay, which has already arisen from it, I am sure you would judge differently in the affair” (204). This quote not only shows Elizabeth’s desire for a positive social standing, but it reflects slightly on how one person’s actions are able to effect an entire family in society. Lydia is able to really develop one of the novel’s main issues: the class difference that separates Darcy from Elizabeth. On page 237, Elizabeth’s fear that she will never see Darcy again, now that he knows of the elopement between Lydia and Wickham is expressed; “… She saw him go with regret; and in this early example of what Lydia’s infamy must produce…” This quote further drives one of the novel’s largest ideas that one person publicly shamed sets a shameful reputation for the whole family, which causes everyone to lose valuable good favor.

In conclusion, Lydia and Mr. Collins are able to develop the reader’s understanding of the ideas and themes present in the novel through simple character interaction. This is beneficial to the development and advancement of the story. While Mr. Collins’ personality is able to draw out specific character traits that are relevant to the story’s progression, Lydia’s character helps further a main problem-solution chain, while giving insight into other aspects of the novel.

Character Analysis of Lydia and Junior in Pride and Prejudice, a Novel by Jane Austen