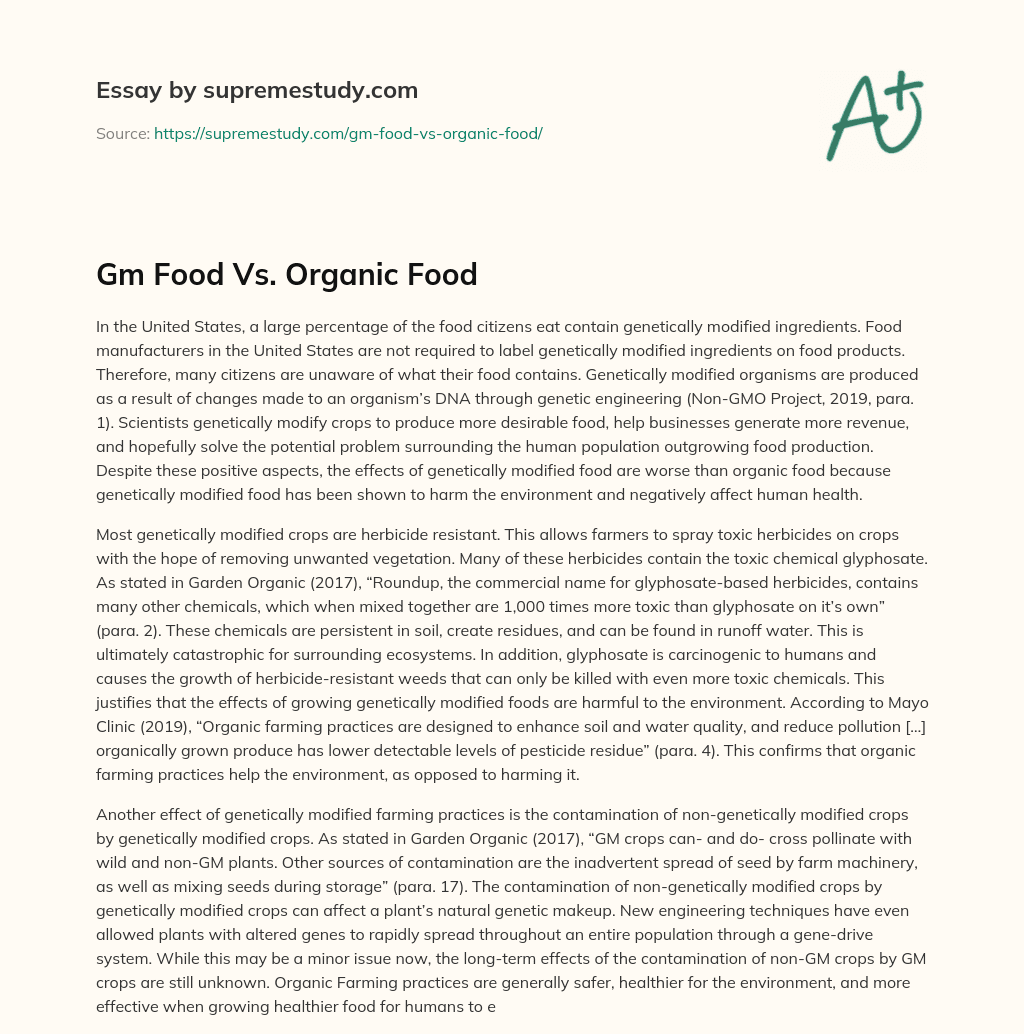 Most genetically modified crops are herbicide resistant. This allows farmers to spray toxic herbicides on crops with the hope of removing unwanted vegetation. Many of these herbicides contain the toxic chemical glyphosate. As stated in Garden Organic (2017), “Roundup, the commercial name for glyphosate-based herbicides, contains many other chemicals, which when mixed together are 1,000 times more toxic than glyphosate on it’s own” (para. 2). These chemicals are persistent in soil, create residues, and can be found in runoff water. This is ultimately catastrophic for surrounding ecosystems. In addition, glyphosate is carcinogenic to humans and causes the growth of herbicide-resistant weeds that can only be killed with even more toxic chemicals. This justifies that the effects of growing genetically modified foods are harmful to the environment. According to Mayo Clinic (2019), “Organic farming practices are designed to enhance soil and water quality, and reduce pollution […] organically grown produce has lower detectable levels of pesticide residue” (para. 4). This confirms that organic farming practices help the environment, as opposed to harming it.

Furthermore, the effects of genetically modified food on humans is unstable and toxic. As stated in the Center for Food Safety (2019), “Genetic engineering allows foreign genes, bacterial and viral vectors, viral promoters, and antibiotic marker systems to be engineered into food” (para. 3). This is harmful to the human body. The traditional human diet consists of a healthy balance of fruits, vegetables, dairy, grains, and protein. Although the average human can survive without this balance, and occasionally make unhealthy food choices, humans have not yet evolved to withstand genetically engineered food. In addition, the instability of genetically modified food is a cause for concern. According to the Center for Food Safety (2019), “Each genetic insertion creates the added possibility that a formerly nontoxic element in food become toxic” (para. 4).

This is because the chemical compounds in food are being invaded by other substances, which cause toxicity in elements that were not toxic before. The Food and Drug Administration warns that the problem of genetic instability in genetically modified food could result in new toxicants as well as an increased level of naturally-occurring toxicants. According to Mayo Clinic (2019), “Studies have shown small to moderate increases in some nutrients in organic produce” (para. 3). This proves that organic farming is significantly better for human health. If the chemical compounds in food stay untouched, they will continue to provide the nutrients needed for humans to survive.

In addition, genetically modified organisms in food have been shown to cause certain types of cancer in humans. This is due to the instability and toxicity of genetically modified organisms in food. Genetically engineered recombinant Bovine Growth Hormone (rBGH) is used to increase milk production in cows (Center for Food Safety, 2019, para. 14). The insulin-like growth factor (IGF-1) in rBGH is able to survive digestion. This means that IGF-1 can make it’s way into the bloodstream and intestines if humans consume the milk. This is a cause for concern because IGF-1 has been known to cause many types of cancers, including colon cancer and breast cancer.

Furthermore, the effects of genetically modified organisms in food may be a possible cause of diabetes in humans. As stated in Garden Organic (2017), “A new potato has been genetically engineered not to show bruising […] a unwelcome side effect of this engineering has caused an increase in the potato’s aminoadipic acid content” (para. 9). This is a cause for concern because aminoadipic acid is a possible cause of diabetes. Organic food is essentially healthier for humans and more natural.

Why to Ban Gmo Foods

The Affects of Genetically Modified Foods

The Use of Genetically Modified Crops Is Good or Bad