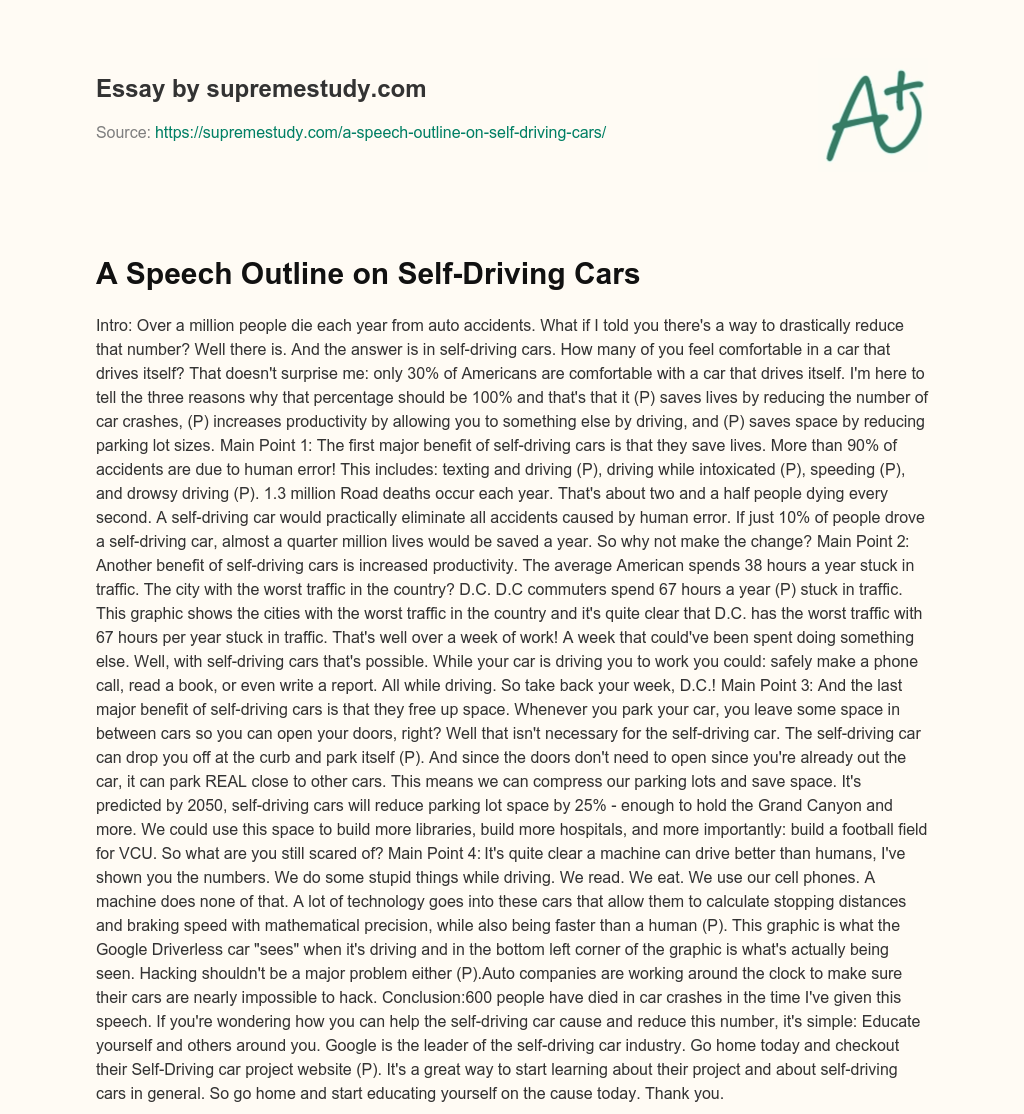 A Speech Outline on Self-Driving Cars

Intro: Over a million people die each year from auto accidents. What if I told you there’s a way to drastically reduce that number? Well there is. And the answer is in self-driving cars. How many of you feel comfortable in a car that drives itself? That doesn’t surprise me: only 30% of Americans are comfortable with a car that drives itself. I’m here to tell the three reasons why that percentage should be 100% and that’s that it (P) saves lives by reducing the number of car crashes, (P) increases productivity by allowing you to something else by driving, and (P) saves space by reducing parking lot sizes.

Main Point 1: The first major benefit of self-driving cars is that they save lives. More than 90% of accidents are due to human error! This includes: texting and driving (P), driving while intoxicated (P), speeding (P), and drowsy driving (P). 1.3 million Road deaths occur each year. That’s about two and a half people dying every second. A self-driving car would practically eliminate all accidents caused by human error. If just 10% of people drove a self-driving car, almost a quarter million lives would be saved a year. So why not make the change?

Main Point 3: And the last major benefit of self-driving cars is that they free up space. Whenever you park your car, you leave some space in between cars so you can open your doors, right? Well that isn’t necessary for the self-driving car. The self-driving car can drop you off at the curb and park itself (P). And since the doors don’t need to open since you’re already out the car, it can park REAL close to other cars. This means we can compress our parking lots and save space. It’s predicted by 2050, self-driving cars will reduce parking lot space by 25% – enough to hold the Grand Canyon and more. We could use this space to build more libraries, build more hospitals, and more importantly: build a football field for VCU. So what are you still scared of?

Main Point 4: It’s quite clear a machine can drive better than humans, I’ve shown you the numbers. We do some stupid things while driving. We read. We eat. We use our cell phones. A machine does none of that. A lot of technology goes into these cars that allow them to calculate stopping distances and braking speed with mathematical precision, while also being faster than a human (P). This graphic is what the Google Driverless car “sees” when it’s driving and in the bottom left corner of the graphic is what’s actually being seen. Hacking shouldn’t be a major problem either (P).Auto companies are working around the clock to make sure their cars are nearly impossible to hack.

Conclusion:600 people have died in car crashes in the time I’ve given this speech. If you’re wondering how you can help the self-driving car cause and reduce this number, it’s simple: Educate yourself and others around you. Google is the leader of the self-driving car industry. Go home today and checkout their Self-Driving car project website (P). It’s a great way to start learning about their project and about self-driving cars in general. So go home and start educating yourself on the cause today. Thank you.

Essays Related To A Speech Outline on Self-Driving Cars

Drunk Driving Is a Major Risk to Yourself

Driving While Intoxicated – Dangerous to Life

Should The Legal Driving Age Be Changed From 16 to 18

How Dangerous Is Drunk Driving

Dangers of Texting and Driving

Cell Phone Use While Driving