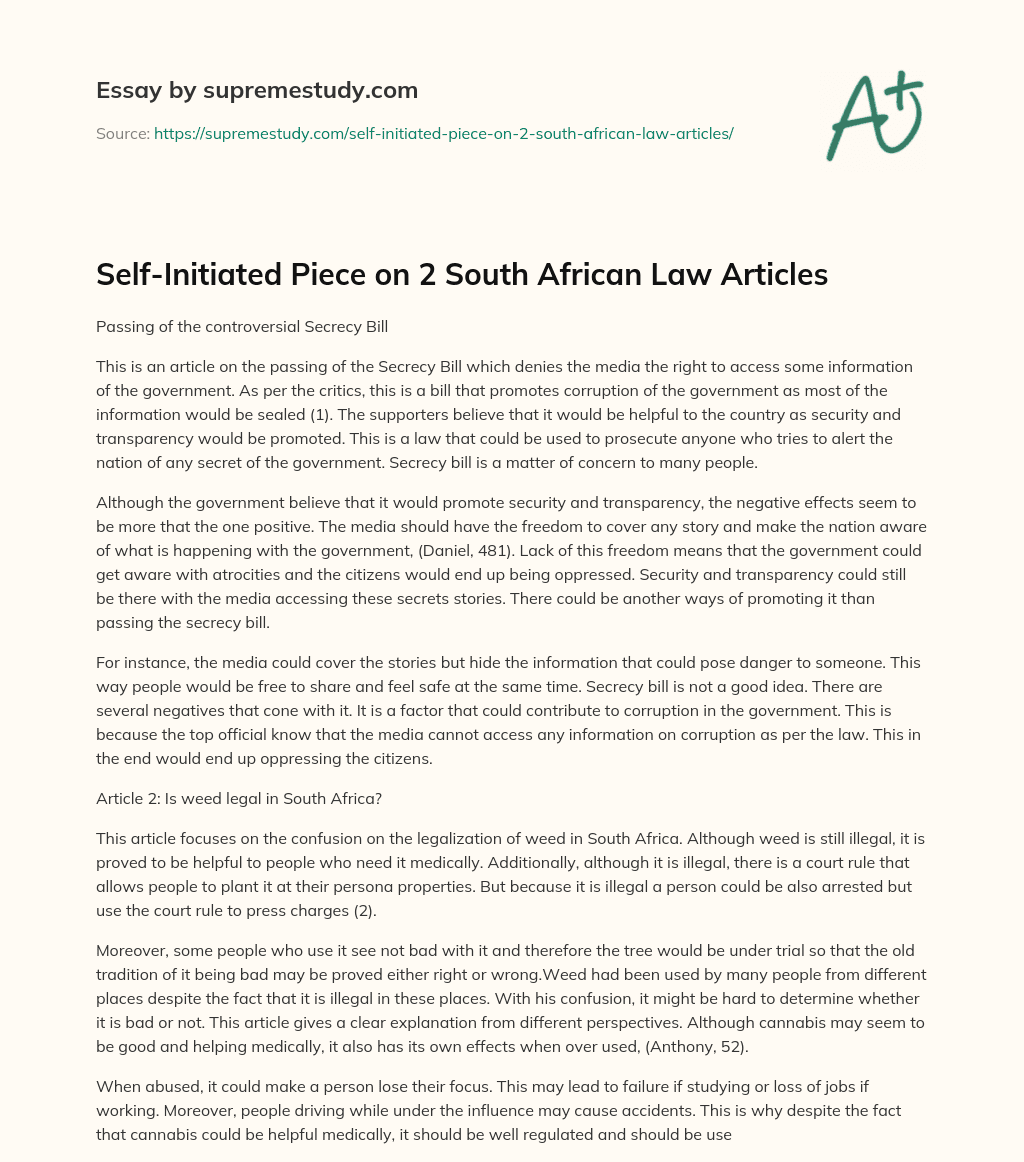 Passing of the controversial Secrecy Bill

This is an article on the passing of the Secrecy Bill which denies the media the right to access some information of the government. As per the critics, this is a bill that promotes corruption of the government as most of the information would be sealed (1). The supporters believe that it would be helpful to the country as security and transparency would be promoted. This is a law that could be used to prosecute anyone who tries to alert the nation of any secret of the government. Secrecy bill is a matter of concern to many people.

Although the government believe that it would promote security and transparency, the negative effects seem to be more that the one positive. The media should have the freedom to cover any story and make the nation aware of what is happening with the government, (Daniel, 481). Lack of this freedom means that the government could get aware with atrocities and the citizens would end up being oppressed. Security and transparency could still be there with the media accessing these secrets stories. There could be another ways of promoting it than passing the secrecy bill.

For instance, the media could cover the stories but hide the information that could pose danger to someone. This way people would be free to share and feel safe at the same time. Secrecy bill is not a good idea. There are several negatives that cone with it. It is a factor that could contribute to corruption in the government. This is because the top official know that the media cannot access any information on corruption as per the law. This in the end would end up oppressing the citizens.

This article focuses on the confusion on the legalization of weed in South Africa. Although weed is still illegal, it is proved to be helpful to people who need it medically. Additionally, although it is illegal, there is a court rule that allows people to plant it at their persona properties. But because it is illegal a person could be also arrested but use the court rule to press charges (2).

Moreover, some people who use it see not bad with it and therefore the tree would be under trial so that the old tradition of it being bad may be proved either right or wrong.Weed had been used by many people from different places despite the fact that it is illegal in these places. With his confusion, it might be hard to determine whether it is bad or not. This article gives a clear explanation from different perspectives. Although cannabis may seem to be good and helping medically, it also has its own effects when over used, (Anthony, 52).

When abused, it could make a person lose their focus. This may lead to failure if studying or loss of jobs if working. Moreover, people driving while under the influence may cause accidents. This is why despite the fact that cannabis could be helpful medically, it should be well regulated and should be used by the people who really need it and not for recreation or any other reason. Cannabis had been found to be helpful in healing some sicknesses. Therefore, it can be legalized only for the medical use.

History of Feminism and Sexism in South Korean

The Housing Stock in African Nation

African Americans Are Most Likely to Be Exposed to Hate Crime

Why We Should Legalize Marijuana